The federal government is still offering tax credits like the 45L to encourage people to use renewable energy and construct homes with improved energy efficiency. Some of these incentives, like the 45L, are substantial. The 45 L tax credit offers $2,000 for every energy-efficient house or rental a contractor builds to lease or sell. That kind of money can quickly add up. If the contractor creates a condominium with 50 qualifying units, they earn a tax credit of $100,000.

What is renewable energy?

Renewable, sustainable or green energy is energy produced by a source that naturally replenishes itself. Fossil fuels like coal or oil aren’t renewable and will eventually run out. Green energy sources like the sun or wind will not run out.

Green energy also has the advantage of being sustainable, and sustainability is defined as the use of individual and institutional practices that can be maintained over generations without imposing hardships on future generations. Green living is a lifestyle built around sustainable practices and can cover items like housing, transportation, and food.

Fossil fuels, on the other hand, will run out. Also, extracting them damages both the environment and the climate – and that damage is getting worse. Humans have already used most of the fossil fuels within relatively easy reach and are moving on to fuels like methane hydrates or oil or gas from underground rock formations that require more complicated and dangerous extraction methods like undersea mining or fracking to reach them. Fracking, for example, has been linked to earthquakes. According to the USGS, the number of earthquakes in the central US has skyrocketed since 2008. 2014 alone saw 659 earthquakes of M3 or larger.

Not anymore. Solar power, especially, is becoming less and less costly. The International Renewable Energy Agency (IRENA) has predicted that solar power will be the cheapest energy source by 2025, as the cost of photovoltaic systems declines by 59 percent over the next decade. In 2015, solar power cost about 13 cents per kilowatt hour compared to the 5 or 10 cents for gas or coal. Constructing solar plants will become similarly less expensive over the next decade and could plunge to 79 cents per watt by 2025. Solar plants could produce as much as 15 percent of the world’s electricity by 2040, compared to the 1.2 percent of 2015. Such developments will make green living through energy use a lot more feasible for many more people.

Wind power is also growing less expensive over the years. The costliest part of any wind power project is the turbine. Making it eats up about 70 percent of the costs of a project, and installing it covers most of the rest. Once in place, though, a turbine can operate for over 20 years, and that allows utilities and consumers to use contracts called Power Purchase Agreements to lock in rates for 20 to 30 years.

What is energy efficiency?

The various tax credits, rebates and incentive programs reward people for constructing or rehabilitating projects to use a variety of energy efficient features including the following:

What is hydronic heating?

Hydronic heating, which is also called radiant heating, uses hot water or some other hot liquid to heat a room or house. Loops of plastic piping circulate the hot liquid through the house. In most cases, the contractor will install the pipes under the floor, and heat will spread evenly across the floor. Radiators can also be used.

What is a SEER Rating?

SEER stands for Seasonal Energy Efficiency Ratio, and it measures the efficiency of heat pumps and air conditioners. The ratio is calculated by dividing the cooling or heating output by the total electric energy input. The higher the number, the more efficient the heat pump or air conditioner is.

What is ENERGY STAR?

ENERGY STAR is an international standard for energy efficient products made in the United States. It was first developed in 1992 by the EPA and the DOE and has since been adopted by other countries like Australia, Canada, Japan and the European Union. To earn the ENERGY Star label, a product must meet federal energy efficiency standards while delivering the same features and performance of a typical product. To earn an ENERGY STAR, a dishwasher, for instance, must clean as well and last as long as a regular model while saving energy. Many types of products can earn ENERGY STAR including office equipment, electronics, lighting, and appliances. Building products like doors, roofing materials, and windows can also qualify for ENERGY STAR, and so can entire new houses.

The ENERGY STAR website includes a list of products that can be certified as such. ENERGY STAR products will be labeled as such with a blue and white star.

Contact Walker Reid Strategies for advice on how to take advantage of the tax credits you can earn for building a new and energy efficient home or rehabilitating your current one to increase its sustainability. 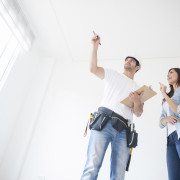